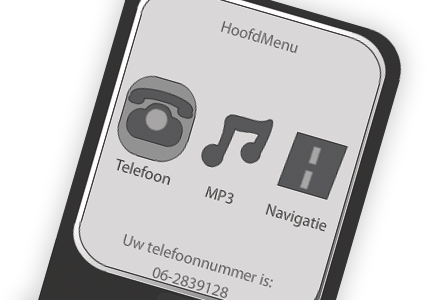 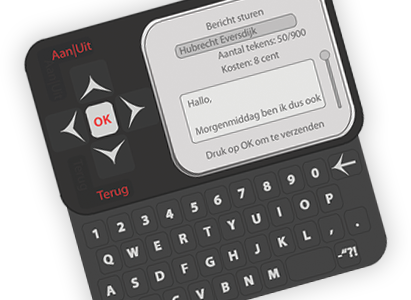 In this school project, the assignment was to create a prototype of a mobile device for elderly people that has phone (call and text messaging), GPS direction and MP3-player functionality. This prototype was to be made in using flash and served the purpose of simulating the interaction with the device.

Resulting from research on and observation of the target audience “elderly people”, I’ve listed a couple of key things to keep in mind while designing the interaction with this device.

What not to do:
What to do:

For the sake of simplicity of use, I decided to split the three main functionalities of the device entirely. At once you can either be using the device as a phone, as a navigation device or as an MP3-Player, you cannot do multiple things at the same time.

“Take the user by the hand and lead him to his goal.”

Every time, the user would be presented with a small menu, in which the user would make a choice to navigate further into the device, until he reaches the function he would like to use. The menu structure is set up in a tree-structure fashion, going from a very global choice to more of a refined choice every time.

The navigation is done using the four arrow keys to go either up, down, left or right and the “OK” button to confirm the selected choice. Also, there is an on/off button and a button to go back one step. All of these keys are on the front of the device, making sure none of them are on the side to prevent the user from accidently pressing buttons.

The device features a slide-out (qwerty) keyboard to ensure large buttons can be used for typing, without a more complicated multi-click, multi-characters per button system.

When the device is being rotated to the side, the buttons (ok on/off and back) would also rotate, for them to remain readable at all times. Also the functionality of the arrow keys would be rotated to fit the device orientation. One only needs to rotate the device when the keyboard is needed. Without the keyboard being folded out, rotating the device will not result in any on screen changes. 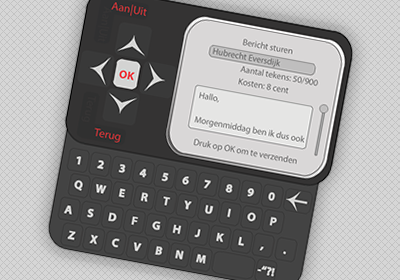 Feel free to play around with the Flash prototype, I’m sorry it’s in Dutch, a lot of elder Dutchies have trouble reading English though, the target audience left me no choice.

As it is only a prototype, don’t expect any of the functionalities other than navigation.